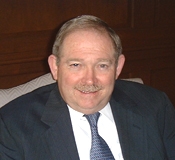 SEND US A MESSAGE

His experience in both the private and public sectors allows Jere to often solve his client’s problems without costly litigation. Having spent many years in government service, most focused on minimizing the regulatory burden on business, Jere has also been able to help his clients through the maze of complicated Federal regulations and procurement problems.

For more than six years, he was the federal government’s lead defender of small businesses in the regulatory process. In that capacity, he systematically analyzed hundreds of regulatory actions by federal agencies, identifying flaws and shortcomings in many of those actions and helping the affected businesses seek relief. Information developed by Mr. Glover’s team led to rollbacks of dozens of regulations and formed the basis of a number of successful lawsuits.

The work that Mr. Glover directed saved the private sector more than $20 billion in annual regulatory costs. It cut a wide swath across many types of businesses including innovation, mining, fishing, telecommunications, transportation, financial services and agriculture. Having also served on Capitol Hill, Jere understands how to make a case with the nation’s lawmakers.

Following his May 4, 1994, Senate confirmation, Mr. Glover served as the Small Business Administration’s Chief Counsel for Advocacy until January 21, 2001.

Prior to joining the Administration in 1994, Jere established his own law firm and was CEO of several successful, technology-related businesses. Well-respected in the trade association community, Mr. Glover has served as a trade association executive and on the boards of several national trade associations. After helping to develop the Small Business Innovation and Research Act while working for Congress, Mr. Glover engaged in private and public venture capital efforts.

Rounding out his two decades of federal government service, Mr. Glover has served as Counsel to the Senate Small Business and Entrepreneurship Committee in 2001. He has also served as subcommittee Counsel to the House Small Business Committee, the Director of the Legal Division of the Consumer Product Safety Commission, and as a Senior Antitrust trial attorney for the Federal Trade Commission. He has testified before Congress over 35 times and appeared in over 200 agency proceedings, numerous Federal Court proceedings, Federal rulemakings, adjudications, enforcement proceedings, and others. Jere was named SBIR Man of the Year by SBIR Insider in 2006.